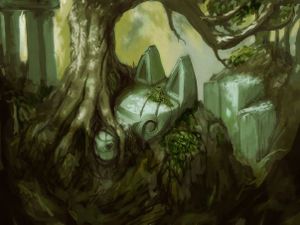 The polearms are longer weapons, with some sort of blade affixed to the end of a pole, to allow for greater reach. This allows for dogs to wage battles against without allowing their enemies to enter close-quarters combat, limiting the effectiveness of natural weapons such as teeth and claws. The dogs use three major types of polearm:

The dogs use single-edge blades on their swords and daggers, which they use at closer range than the polearms. The blades are a strong example of the rectangular motifs used in the dog culture, and carry a distinctive, polygonal-shaped blade. As with the polearms, there are three types of bladed weapons utilized by the dogs:

The dog warhammer is a massive weapon, and must be carried in both hands. It is very cumbersome and unwieldy in battle, but still remains commonly used by the leaders of clan Stone, because of its cultural and historical significance (see below). Though cumbersome, the weapon is highly effective against heavily opponents.