Basic unarmed strategy is fairly straightforward. Beat up your opponent(s) and reverse their attacks and reversals. There are a few things that might not be immediately obvious:

Weapons are common in the later levels and are very useful to your survival. You can pick up weapons on the ground by crouching over them and pressing the pick up key. However, if you are slick, you can roll over the weapon and press the pick up key instead. This is much more useful in the heat of combat. Swords and knives can be sheathed in your belt. You can carry two weapons by sheathing one and holding the other. Normally, you can only sheath or unsheath weapons when standing still, but you can actually (un)sheath them while rolling or doing a flip in mid-air.

If two people using weapons attack each other at the same time, they will hit each others weapon. This often repeats until someone's weapon flies out of their hand or breaks.

The knife's main use is as a thrown weapon. As a melee weapon, you are probably better off using your bare hands. If you slice an enemy wolf with a knife, their current attack will not be cancelled. That is, if a wolf is about to kick you in the face, and you slice him first, you will find yourself painfully hurtling across the map while the wolf has a tiny spot of blood from your weak knife. A good way to swiftly kill a wolf when you have a knife is to sweep him and stab him when he's down.

The knife is the only weapon that can be thrown, and it is extremely deadly. Against any un-armored rabbit, it's a one hit kill, otherwise it will take two hits. So, you can use it to stealthily dispatch most enemies without even being near them. If an enemy has already seen you, they will dodge the thrown knife most of the time. In a wolf's case, they will even catch it. To avoid this, make sure that you throw the knife as they are getting up from a fall or throw it from mid-air as you are doing a flip.

The sword is definitely the most powerful weapon in Lugaru. It has long range, it causes permanent bleeding damage, and it is indestructible. You want this weapon.

To acquire a sword, you must successfully reverse an enemy holding it. This is a dangerous task, but very easy once you know what you're doing. It is tricky because the range of the sword is greater than the range of the reversal, so potentially you can get slashed without the opportunity for a reversal. Note that you can always dodge the sword by performing a handspring (hold back and attack) which will change into a dodge animation. The most effective way to disarm an enemy with a sword is to run at them so that you are as close as possible and reverse their attack.

Killing enemies is not as simple as it might seem. After a few attacks you will find that your slashes will constantly get reversed. To avoid this, make sure you attack your opponents before they are in reversal range. An easy way to achieve this is to simply hold down the attack button - you will automatically attack the instant an enemy gets in range. This in turns pushes them back out of range and you can repeat this until the enemy is dead.

The staff is an excellent weapon - while it lasts. The staff will break after a number of hits. It has two different attacks; the standing attack which brings the staff down vertically (note: this can be used to hit enemies on the ground) and the running attack, which will bring the staff around horizontally and send your enemy flying.

The most effective way to use the staff is to knock your opponent down either by sweeping him or performing a standing attack. Once they are on the ground, you can pound them until they are dead.

Attacking an enemy with a staff is dangerous. Like with the sword, the best way to disarm an opponent is simply to run at them until you are very close and reverse their attack. The staff has a longer range than your reversal's so you will need to be careful not to be caught in a situation where the opponent can hit you, but you can't do anything about it.

Sneak up behind an enemy (crouch-walk or run-and-roll), stand up, and attack. Alternately, leap to land directly behind enemy. This will flip the enemy over and slam them into the ground.

Sneak up behind an enemy and attack with a knife. This will slice the enemy's throat. 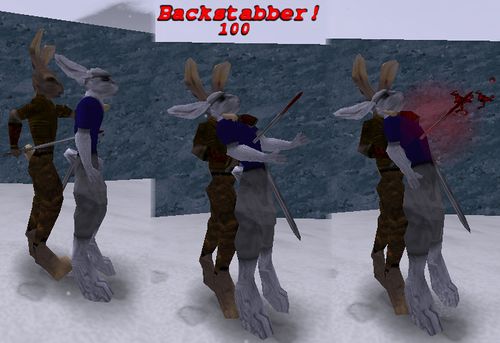 Sneak up behind an enemy and attack while wielding a sword. This will stab through an enemy.

Stealth kills are very useful on many maps. If you don't want to draw out a fight which may attract the attention of other enemies, stealth is one of the best options. They are quick, usually silent, and always deadly. You must sneak up behind an enemy before you can perform a stalth kill. This is carried out by rolling or creeping up behind an enemy without them noticing, and attacking. They work unarmed and armed, with the exception of staves. All stealth kills are worth 100 points.

A Note on Wind

Be sure to watch the wind if you are stalking a wolf. A wolf will smell you if you are upwind of them. Also, rabbits can hear you. Stay out of the way of bushes, and roll up behind them; you'll be in position for the kill. Note that you cannot roll to surprise a wolf because rolls are too slow. You need to long jump to spinecrush a wolf, and it is advised to air control forward to gain speed before landing.

Reversals are the soul of Lugaru. They earn points, and are vital during combat. With insane mode on, all reverses can only be used when facing the enemy. However for wolves, you can reverse from any direction, regardless of difficuly.

Generally, enemies will never use Turner's punch, they will stick to the double punch. Wolves will punch, but they are irreversable for Turner, you can only block them

Reversed by hitting shift before the punch reaches impact. Too early will result in a hit, the double punch can hit both standing and crouched opponents

Hold shift to duck it, release it when leg is somewhat over you.

Hit shift when you see the attack coming, the window is open the entire time between the start of the move till before impact

Same with the above except it has even longer reach. Early crouching doesn't matter, it only hits standing opponents (you won't reverse though)

Hit shift when the enemy has your leg on his shoulder, not when you get kicked

Blocks are not reverses, they are moves to keep you from taking too much damage.

These are not rewarded as points, since they don't actually damage your foes. They will however, keep you alive.

Every level has one or more Optimal Routes, depending on what you wish to accomplish. The route for a high score will almost certainly be different than the route for lowest time, and finding the perfect path requires much time and dedication. Times listed are for the time shown on the High Score/Best Time screen, not on the Level Cleared screen, which are about six seconds longer.

Whaleman Does NOT Approve!

Sneak up behind an enemy (crouch-walk or run-and-roll,) stand up, and attack. Alternately, leap to land directly behind enemy.

Hit an enemy with basic barehanded attacks: punch, double punch, front kick, roundhouse kick, leg sweep or wall kick. Also awarded for pulling a leaping enemy out of the air and throwing him to the ground. Each additional hit in a short amount of time produces the following bonuses (also awarded for successive attacks against multiple enemies):

Hit an enemy with a "leg cannon" attack: run toward an opponent while holding attack and press jump when you are close.

Press crouch when an enemy throws a barehanded attack. The type of reversal depends on the attack and your timing in response. A leg sweep is blocked with a foot on the ground and followed by an uppercut to the head. A roundhouse kick is caught on the shoulder by crouching and coming up under the leg, followed by a counter-kick to the midsection. A double punch reversal is turned into a shoulder throw by catching the hands and spinning. A normal punch is merely blocked, however the enemy will follow up their block with a hit to the face. There is also a reversal for a Leg Cannon, but no bonus, since it is only used against you; no enemy uses a Leg Cannon for you to reverse.

Same as reversal, but it requires that you knock out or kill the opponent with the blow.

Crouch-walk, then while still crouch-walking, stop crouching. You will begin to run on all fours. Run towards an enemy and attack.

This bonus occurs when you hit an enemy (dead or alive) into another. You can either "leg cannon" two enemies together, or crouch attack a corpse and launch it at an opponent. Sometime awarded when a normal strike (roundhouse kick, wall-kick, etc.) knocks two opponents together. Also awarded when you slam into a leaping opponent in the air, intentionally or otherwise, which unfortunately usually kills you.

Kill an enemy with a wall-kick.

Attack with the knife.

After 2 slices in a row, attack again and you will stab the enemy in the throat. Attack is a finisher so you could actually attack a well armored opponent multiple times in a row before doing this move.

Hit the enemy with a thrown knife.

Sneak up behind an enemy and attack with a knife.

Kill with mid-air throw as you flip over an opponent. (You can throw knives while flipping - press crouch and pick up\throw in mid-air.)

Attack while wielding a sword.

Sneak up behind an enemy and attack while wielding a sword.

Vertically strike the opponent while standing still, can be awarded by hitting fallen enemies.

Attack an enemy horizontally by moving during your attack.

Note: Staff attacks are not named, their bonuses are properly awarded though.

-- A verticle strike is a solid hit, multiplied by 4.

-- A horizontal strike is a solid hit, multiplied by 6.

These techniques will gain you the weapon you're being attacked with, as well as the points listed, while dealing some damage to your foe.

Reverse a staff attack. Points are not gained by reversing "verticle swings"

This occurs where your attack hurts the enemy so much that instead of rendering them unconcious, it kills them. May be awarded for many different successful attacks: staff strikes, after Cannon Legs into distant objects, drop kicking bodies into enemies, wall-kicking, etc.

Fall or jump on an enemy from above.

When an enemy is on the ground, crouch-attack them with a knife or sword.

This occurs when your enemy dies after striking (or being struck by) something, either intentionally or accidentally: a wall, the ground, your body, a knife, a staff, etc. Like "Touch of Death" it may be awarded when this is the result of a number of different attacks. It is also usually the result when chasing and attacking a fleeing enemy, leading to a tackle and the death of the foe.