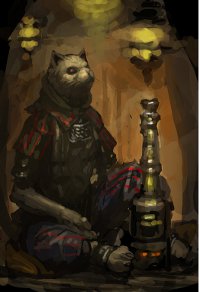 Alshain De Carbonel as seen in the blog.

Alshain De Carbonel is the leader of the Assasins of the Bright Tapestry. In his time as an imperial duellist, Alshain was considered a master in combat and became so proficient that few other Cats would challenge him. Deprived of combat, Alshain turned to Muridaen drugs as a substitute and soon became addicted to them. Despite his addiction, he was still called upon as a duellist and incorporated his drug use into his combat style in what detractors called "some kind of obscene dance." His combat style developed a following of other disgraced and drug addicted duellists, which also sought the potent drug mixture that Alshain has concocted.

Over time, Alshain grew to hate him self for what he had become, but after a night of drug use Alshain was reported to have seen a vision in the rising sun. He claimed that the gods had shown him that cat society was a "tapestry, corrupted, soiled and torn by endless unresolved feuds." After his vision, Alshain resolved to correct this perceived wrong through means of assassinations and threat and thus created the Assassins of the Bright Tapestry.