To trigger a dialog just before starting on a new goal (whether a "reach" or "defeat" goal):

To trigger a dialog just after achieving a checkpoint goal (whether a "reach" or "defeat" checkpoint):

Do all the same as a dialog triggered before progressing to a given checkpoint, but name the parameter "goal_<number>_post" (e.g. "goal_5_post")

Make sure that checkpoint_id starts at zero, and increases by 1 (and only by 1) for each subsequent checkpoint. This will be true even if the first reach goal isn't goal_0!

Make sure that reach N values match the values for checkpoint_id. 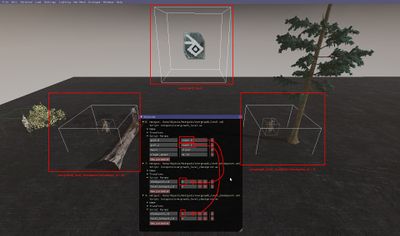 up the script parameters for the overgrowth_level instance.

Example of matching up player_spawn and placeholder object id values
Retrieved from "https://wiki.wolfire.com/index.php?title=Checkpoints&oldid=5178"