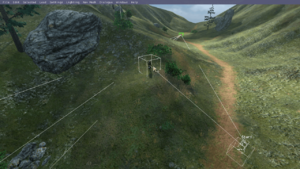 This page details all the interface elements and actions in the Overgrowth level editor. It can be accessed by pressing the Editor button on the main menu, selecting one of the levels and then pressing escape when in the game. 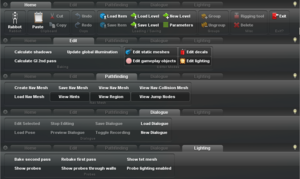 The tabs of the ribbon user interface

The horizontal bar across the top of the window is called the ribbon. Many editor functions can be found here, but some functions can only be reached via hotkeys for now.

Contains the most common tools. 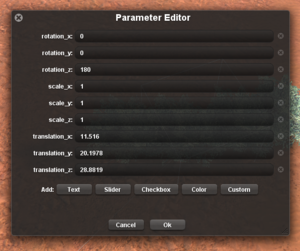 You can bring up the parameter editor for an object by selecting it and pressing U, or for the level itself by clicking the "Parameters" button in the home tab of the ribbon. It allows you to change different parameters depending on what object you have selected. For instance if you use it on a regular static object you can precisely adjust its position, scale and rotation. If you use it on a character you can adjust a large number of parameters, including its field of view.

Note: You can visualize the field of view of a character by going to ../Overgrowth/Data/Scripts and opening up aschar.as and changing the row saying "const bool _draw_stealth_debug = false;" to "const bool _draw_stealth_debug = true;". Then open up enemycontrol.as and change the line saying "float fov_opac_mult = 0.0;" to "float fov_opac_mult = 1.0;". Save both files and tab back into the game and you should see a visualization of every character's field of view.

Open up the parameter editor for the current level by clicking the the "Parameters" button in the home tab of the ribbon. Here is a description of what each parameter does.

When you select an object some useful information will appear on the left hand side. It'll show you what xml file it is created from, its unique object ID and what type of object it is.

Just below the ribbon on the left side is a space for warnings. These warnings will tell you if the nav mesh, ambient occlusion or baked shadows needs to be updated. 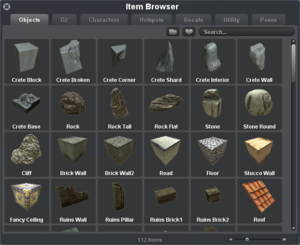 The item browser is used to browse for items that can be spawned in the levels. It is brought up by pressing the Load Item button under the Home tab. To spawn an item, click it and then click in the world to create the item on that location.

This list does not necessarily contain all the objects that can be spawned as all objects need to be manually added to the list. A file browser can be brought up by pressing the folder icon just under the tabs at the top. That file browser can be used to try loading any xml file, which is useful if you're trying to load a custom object that has not been added to the item browser for instance. The types of items that can be spawned are objects (static models), characters, weapons, hotspots, decals and spawn points.

Along the top of the window there are tabs for different categories of items. In the bottom right there is a slider to change the size of the thumbnail images as well as a grip that can be clicked and dragged to resize the window. A search field that searches in the currently open tab is located under the tabs to the right.

Hovering your mouse cursor over a thumbnail image causes a heart icon to appear on the thumbnail. If that heart icon is pressed the object is added as a favorite. To sort out any object that is not a favorite from the view, press the heart button right under the tabs at the top of the window. The favorites do not persist between closing and opening the item browser. 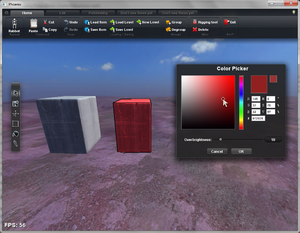 Two crete blocks. The left is the original, the right has had it's color altered by the color picker.

The Color Picker is used to tint the color of selected objects. It is opened by pressing CTRL+P (For Mac users: Command+P). The color picker consists of a color-gradient box, a rainbow slider, two boxes of different sizes showing the basic chosen color, RGB values, a hex value, and an overbrightness slider. Increasing overbrightness makes the color brighter.

To make a character spawn as a corpse, select it and press ctrl+K (or cmd+K) to turn on corpse mode. Its spawn box will turn red and the character will now be a corpse when it spawns. If you want to place the corpse in a specific location, drag the corpse to where you want it, then hit ctrl + K to save its resting position as its new corpse spawn position. 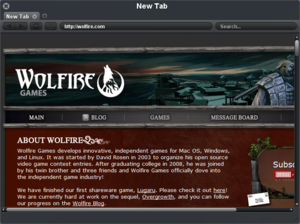 There is a web browser that can be brought up by pressing f1.