This tutorial is based on jo-shadow's tutorial How to make your own models for OG.

This tutorial will teach you everything you need to know to make your own objects and how to get them into the game.

Please keep in mind that this method is by no means the only way of making and adding Objects. It is merely one of very many ways, but doing it this way should be easy to learn and understand for anyone. Some experience with 3D programs would help, but even the most inexperienced beginner should be able to get results with this guide.

What you will learn

This tutorial will cover how to do the following:

What you will need

You will need the following for this tutorial:

Please make sure that you have these necessary programs before you start.

It is advised, but not necessary, that you first take a look at the Wings3D manual to help you become comfortable with its interface. It contains some very quick and easy tutorials that will teach you everything you need to know for this tutorial and then some.

Here are some quick Wings3D basics:

So without further ado, let's Begin.

Because it has been so widely requested in the SPF forum, and for the sake of simplicity, in this tutorial we will make a simple textured 3D cylinder. However, Taking it a step further to more advanced models should not be a problem.

Now we need to generate a UV map for the object so we can texture it.

When you want to apply a texture to a 3D model, you might run into some problems. The best way we know how to deal with textures is as a 2D image, but how do we take a 3D model, and make a 2D image out of it? Well let's imagine that we have an orange painted like a globe like this:

And we want to make its surface flat kinda like this: 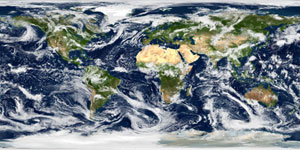 The solution is we peel away the surface, cutting it in a certain way so that it lies flat: 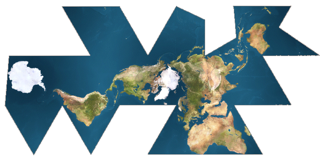 This is what we have to do with our cylinder: We have to cut it up so that we can lay it flat on a 2D plane.

Each vertex of the Model, which already has a 3D coordinate of (X,Y,Z) will now also have a 2D coordinate on this special plane, so that we know how to fit the texture onto our object. This 2D coordinate is defined as (U,V), which is why this is called UV mapping. This is a simplified way of describing UV mapping, but for this tutorial it will do.

Note: there are other methods for applying textures to models, but this guide only uses UV mapping.

and the name of your object: PICTURE

Now we have to Divide the object into different shapes so that it can unfold it properly, just like in the globe example. This can be done Automatically or Manually. For the sake of practice let's do it by hand: You can separate different pieces either by marking which edges to cut, by coloring the faces that should go together, or both.

Choose one of the nine colors Labeled AuvChart1-9 from the drop-down menu. Doing so will mark these faces as being separate from the rest of the model.

Select the rest by selecting similar (i), then mark these with a different color.

In Edge mode (E) select of the vertical edges and choose 'mark edges for cut' from the drop down menu.

Choose Continue->Unfolding from the drop down menu

You can also scale and move parts of the model around on the UV map, and the changes will be apparent on the model. Making a face take up more of the UV map will make give it a denser more detailed texture. This is often used to make important features of a model more detailed, like the hands and dace of a character.

If for whatever reason you don't like how the unfolding ended up you can select your object, and in the drop down menu Choose UV Mapping-> Force Segment (delete previous) to start from a clean slate.

It's important to note that there can be many different ways of cutting an object and the resulting UV maps can look very different.

Depending on your model one might be better than the other, sometimes they both suck and you have to do it manually, and sometimes if your model is simple like this one they will both give you the same result.

If you cut the object in weird ways it will end up unfolding weirdly, like this for example: PICTURE

Once again, the best way to understand how this works is to experiment and try out the various features.

Although there are many different ways of mapping any Model, as a rule you want its faces to use the UV space as efficiently as possible, because any texture that isn't under the mapped Faces will not be seen anywhere when the texture is applied.

There are entire programs devoted simply to finding the best way to generate the UV map for any given model, and the tools wings3D provides are much more basic. However they are sufficient for a simple object like this. With practice you can even manage more complex ones.

Now that We've Finished UV mapping let's generate the texture for the model. Rest assured, the hardest part is done.

Generating a texture from the UV Data

We have our lovely UV map, and now we need to generate a texture we can then edit.

Choose a size depending on how big the object will end up being, and how detailed you want it to be. The larger the image, the more detailed the texture will look on the model. It wouldn't make sense to have a super-high detailed texture for a fork, and you wouldn't want a low quality texture for a skyscraper either. For this object 512x512 will work just fine.

Set the first as 'Background' and the second as 'Draw Edges' so the edges appear on the texture. Press OK.

Then make a new folder in a location of your choosing and save it as whatever title you like. It will save a .obj and a .mtl file. Delete the .mtl file. It has to do with materials that we don't need.

Right click it, Choose export and save it in the same folder as the obj, name it whatever you want, preferably the name of your object plus _Color. For example:

You are now done with Wings3D!

Now it's time to get creative!

Here is one way of doing it in photoshop, that allows you to keep the Template's lines above your texture for reference:

This will make the white in it transparent, and the black remain as an overlay. you can use it as a guide. lock it as well.

I just used some stock photography I found online. The area with the red text is wasted space that could have been better managed when I made the UV map. It will not appear on the final Model, but will take up space in memory none-the-less.

Once done, make sure to save the image -without- the Template, unless you want it as part of the final Texture. Don't worry too much about what format you save it as. Thanks to the built in image converter almost any file type will work in the engine. I personally would advise you to use .tga or .png.

Changing the Reflectivity of the texture

If you were to use this texture as it is, the resulting object would look very shiny. That is because Phoenix will set the reflectivity, or inherent 'shininess' of an object depending on the transparency, or alpha value of the texture.

If you want your object to look more matte you need to add transparency to your texture. There are several ways to do this:

Making a normal map for the texture

This tutorial does not yet include Instructions for making a normal map. Until someone writes it up, just use the following blank normal map: blanknormal.png (5.36 KiB) Viewed 566 times

Setting up the folders

Phoenix, Overgrowth's engine uses XML files to tell it where an object's files are located. These XML files are by default located in Data/Objects. For example the Rock1a.xml file:

The way the file works is self explanatory. The tags indicate what the provided file path points to. As you can see all the file paths have Data as their root. Because of this you'll want your files to be inside the Data folder.

Until the team implements a more elegant solution I suggest that in the Data folder you make a folder called Custom and keep all your files in there. I chose to imitate the file structure in Custom that the Data folder uses by default: PICTURE

However you can save it any way you choose. If you want to share your Objects with others it is be best to keep all the files in one Folder inside Data/Custom. ultimately in the engine it doesn't make a difference, as long as the XML file is defined correctly

Now that everything is in the right place you can make the xml Object file.

I don't quite know how the shaders work, but I tested each out and listed them here. Cubemap will work best for most objects.

Testing the object in the engine

Now the moment you've been waiting for:

The above Object uses a texture without transparency and so looks shiny.

This Object uses a texture with transparency and so has matte areas:

If you get an error message saying that a file cannot be found make sure that the file-paths in the XML Object file are correct.

Here is the final Custom Folder which I made for this tutorial. It contains two objects: one with changed reflectivity, and one without.

unzip it, make sure the resulting folder is called 'Custom" (otherwise the xml file paths would be incorrect) and place it in the Data folder.

(Notice that I actually did a bad job with the UV mapping, because I chose to automate it and not do it manually, and the texture is not a continuous band, but broken up into 4 parts.)

I really hope that this Guide will be helpful to you. A-lot of thought and effort went into it, plus at least a good 5+ hours of work

One thing I cannot stress enough is that this guide is by no means perfect, and there are likely better ways of doing this.

My challenge to you is to not just use this guide, but expand on it: Try texturing a sphere, a rock, a Tree, never stop experimenting. Apply what you've learned here and use it to help you make some great content for this game.

If you have any questions or problems when trying to recreate what is illustrated here, please feel free to ask the friendly people in our [www.wolfire.com/irc IRC channel].