Difference between revisions of "3D Objects"

based on this forum post by member Markuss. There is a linked .zip file attached to the forum post. it can be found here: http://www.markstockton.com/misc/Guide/Examples.zip

Phoenix uses .xml files to store information about what textures a certain model should use as well as other information such as what shader it should use. This is the file you choose when loading an object. Here is an example object .xml file:

All object .xml files that ship with the game are located in ../Overgrowth/Data/Objects/.

The object .xml files contain all information about a single object (model) that can be spawned in the engine. This aims to be a full reference over all tags and flags that can be used in an object .xml.

These tags are deprecated and should not be used.

Flags are entered as boolean attributes in an element called "flags" that is located under the "Object" element. For more information about the "flags" tag, look under tags. All flags have a default value of false.

The engine automatically generates a simplified physics object and uses the object’s UV layout to place the shadow maps, these can be overridden by providing alternative .OBJ files that contain the desired information. These objects are placed in the same folder and share the same name as the original .OBJ file with a suffix to tell the engine what data they hold:

Note that the suffix formats are inconsistent, _COL is placed before the file extension while _UV2 is place after, and HULL doesn’t have an underscore to separate it from the file name.

Physics mesh should be placed on top of the render mesh

Simplified geometry such as boxes an cylinders which are used for collision detection, they are aligned to your object based on “relative position” in your 3D program so you should place the physics mesh on top of your render mesh upon export. 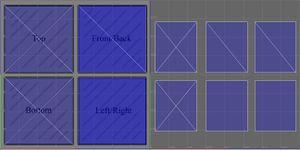 These objects tell the engine how to place the shadow map on the rendered object if the original UV layout isn’t appropriate, the shadow maps require UV layouts with no over-lapping faces, this can usually be achieved using the “automatic unwrapping” tools found in most 3D applications.

Hull objects are placed over render mesh like physics objects

They are very similar to physics objects but are used for items and weapons, the only difference is that they contain a free-floating triangle which defines the object’s center of gravity.

There are two texture maps that are required for an object to be loaded in the engine. Those are the ColorMap and the NormalMap textures. Some shaders allow - but do not require - for additional maps to be specified for different purposes. Shaders with "obj" in their name expect the supplied NormalMap texture to be in object space, those without expect tangent space.

Here are the most common channel designations of the ColorMap and NormalMap textures:

Any deviations from this standard for any shader in the table below can be seen in the Non-standard channel designation column. This includes any optional textures.

These are the materials that can be assigned to objects. These only work on terrains and not on objects placed in the world.

Items are things that a character can pick up in the game, a large part of the items in the game are weapons. An item .xml file is needed to make an object into an item. The item .xml files that come with the game can be found in ../Overgrowth/Data/Items/. Items are picked up by their center point.

As an example, here is the item .xml file for the flint_knife weapon that comes with the game: